Nicaragua, officially the Republic of Nicaragua, is the largest country in the Central American isthmus, bordered by Honduras to the north and Costa Rica to the south. The country is situated between 11 and 14 degrees north of the Equator in the Northern Hemisphere, which places it entirely within the tropics. The Pacific Ocean lies to the west, and the Caribbean Sea to the east. The country’s physical geography divides it into three major zones: Pacific lowlands; wet, cooler central highlands; and the Caribbean lowlands. On the Pacific side of the country are the two largest fresh water lakes in Central America—Lake Managua and Lake Nicaragua. Surrounding these lakes and extending to their northwest along the rift valley of the Gulf of Fonseca are fertile lowland plains, with soil highly enriched by ash from nearby volcanoes of the central highlands. Nicaragua’s abundance of biologically significant and unique ecosystems contribute to Mesoamerica’s designation as a biodiversity hotspot. 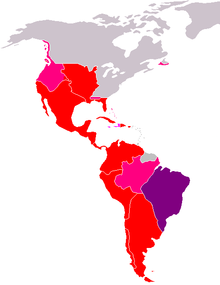 The Spanish Empire conquered the region in the 16th century. Nicaragua achieved its independence from Spain in 1821. Since its independence, Nicaragua has undergone periods of political unrest, dictatorship, and fiscal crisis—the most notable causes that led to the Nicaraguan Revolution of the 1960s and 1970s. Prior to the revolution, Nicaragua was one of Central America’s wealthiest and most developed countries.[citation needed] The revolutionary conflict, paired with a 1972 earthquake, reversed the country’s prior economic standing. Nicaragua is a representative democratic republic, and has experienced economic growth and political stability in recent years. In 1990, Nicaragua elected Violeta Chamorro as its president, making it the first country in Central American history and the second in the Western Hemisphere to democratically elect a female head of state.

The population of Nicaragua, approximately 6 million, is multiethnic. Roughly a quarter of the population lives in the capital city, Managua; it is the third-largest city in Central America. Segments of the population include indigenous native tribes from the Mosquito Coast, Europeans, Africans, Asians, and people of Middle Eastern origin. The main language is Spanish, although native tribes on the eastern coast speak their native languages, such as Miskito, Sumo, and Rama, as well as English Creole. The mixture of cultural traditions has generated substantial diversity in art and literature, particularly the latter given the various literary contributions of Nicaraguan writers, including Rubén Darío, Ernesto Cardenal, and Gioconda Belli. The biological diversity, warm tropical climate, and active volcanoes make Nicaragua an increasingly popular tourist destination.

León is a department (state) in northwestern Nicaragua (5,138 km2). It is also the second largest city 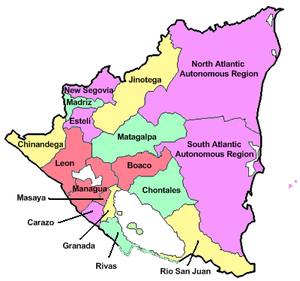 in Nicaragua, after Managua. It was founded by the Spaniards as León Santiago de los Caballeros and rivals Granada, Nicaragua, in the number of historic Spanish colonial homes and churches. As of 2005, the city had an estimated population of about 175,000 people which increases sharply during university season with many students coming from other Nicaraguan provinces. It is the capital and municipality of the León department.

León is located along the Río Chiquito (Chiquito River), some 90 km northwest of Managua, and some 18 km east of the Pacific Ocean coast. Although less populous than Managua, León has long been the intellectual center of the nation, with its university founded in 1813. León is also an important industrial, agricultural (sugar cane, cattle, peanut, plantain, sorghum) and commercial center for Nicaragua.